Posted by jedeje helmond Nederland at 6:20 PM No comments: 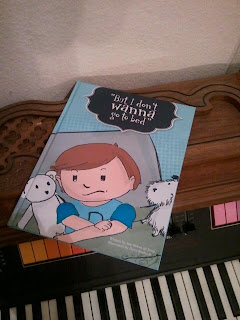 The hardest part of my post-TBI life is accepting that I've lost my ability to write professionally. Where my thoughts used to flow so fast, I couldn't help but write, not the process is slow, cumbersome, and usually full of typos. I usually have Niels proof my blog posts to take care of the most obvious errors. And if I have any sort of deadline, my brain just freezes and I can't think of anything.

About three years ago, when D was a baby, I was up in the middle of the night and I had a rare flash of inspiration. I had the idea for a series of books about a little boy who doesn't always want to do what he needs to do. I ran down to my computer to put down my thoughts and the basic text of the first book, "But I Don't Wanna Go To Bed."

In the morning, I read what I wrote, fully expecting that it would be gibberish. Instead I was very pleasantly surprised that it was still the cute story I thought I wrote the night before.

Over the next few days, I made a very simple version of the book using Powerpoint and images from the internet.
I've wanted to make the project into an actual book, but knew that my brain would not be up for the pitch process. And really, even though I was working on a proposal for a children's book series before my TBI, I really just wanted something to pass on to my son so he could understand a little bit of my old self.

I remembered my talented friend, Dave Butler, who wrote and illustrated a super cute adoption book, what I had bought for a few of my friends. 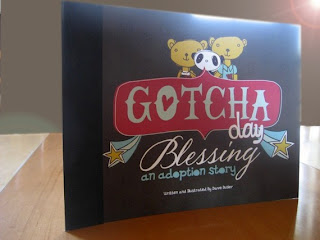 So we starting talking about working together to illustrate my story. 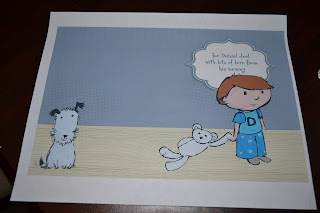 Originally, we had hoped to have the book ready for Christmas. It's the Christmas gift to D's grandparents. The idea is that they could read the story to him over Skype as a way to stay connected. But between my terrible three-month headache, the energy spent on our new house build, and the realities of working with a brain that doesn't always work the way I want it to, and it took a little longer. Fortunately, Dave was great to work with, and very patient with me!

The page is a great example of how happy I am with his work. Since writing the book, our sweet Bailey dog passed away. Dave added Bailey to each page as a silent tribute to her, and it's fun for D to find her in each page. (It isn't hard, but he's three, so it's fun!). Also, since we're a Dutch family, the tulips are a nice touch. And yellow is D's favorite color. 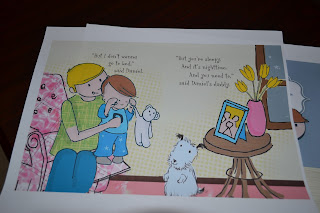 Yesterday, Dave gave me the good news that the books are in! I ordered a small amount for family, and of course, for D, but we're already had a few requests for copies on Facebook, so I'll soon put in another order so we can sell them to anyone who's interested. 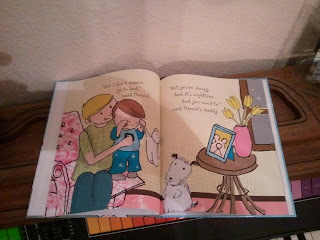 It's a lot less fanfare than my previous book release, but in many ways, I'm even more proud of this book. I can't wait to read D the real thing! And maybe, my brain will get started on the next one, "But I Don't Wanna Eat My Peas."
Posted by Jen @ de Jong Dream House at 11:37 AM No comments:

In the spirit of our new family tradition, here's my birthday interview. 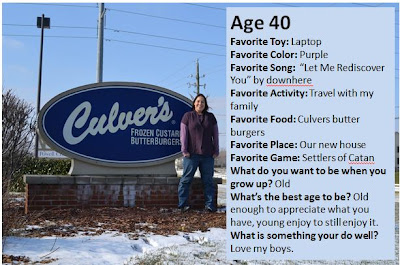 Today is my last day in my thirties. Happily, 40 doesn't seem to bother me as much as 30 did. Perhaps because, other than sustaining my TBI and the fun that went with it, my thirties were pretty fantastic. I started out in a career I loved, my first book was published, I was under contract for a second, I was a home owner, I had a sweet puppy dog, and best of all, I met and married my best friend, and our lives were blessed with the arrival of our little boy.

As I think ahead to the next twelve months as a forty-year-old, I see a pretty awesome year ahead. I look forward to, in no particular order. 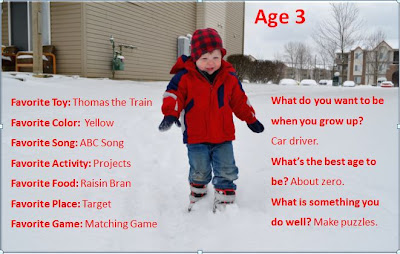 I saw this idea on Pinterest and thought it would be a fun tradition to start. I did the interview closer to his birthday, and we've played "the question game" almost every day since. These answers are pretty standard.

This picture was taken on January 3, when we finally got a bit of snow. This is the first year that D has had any interest in the snow, but he tires of it as quickly as his mommy does.
Posted by Jen @ de Jong Dream House at 9:38 PM No comments:

Since the last post on this blog we've created the new blog we were talking about in the last post detailing the new house we're building, sold the old house, moved to an apartment and are now about 6 weeks away from moving into said dream house. 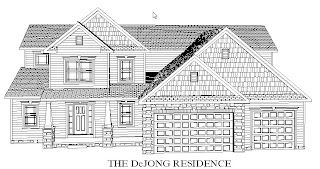 This section could ultimately - and has now become - a new blog. We've closed on the construction loan for the new house and we are planning to start digging in the next few weeks. The lot is located at 4368 Folkstone Circle, Uniontown, OH 44685 but it is still in the city of Green - where we live now even though with a North Canton mailing address (blame local and school politics for that little gem of clarity...)

Anyway... we are building an ultra energy efficient 2-story full ICF (insulated concrete forms) house (projected HERS score: 40) with dual master suites since we have family and friends from near but mostly far and aging parents that will visit for extended periods of time. Plus, if something happens to us (accident, etc...) we can use it as well.

Below are two links to the house plans; the first link is the full set of plans from February and since then we've made a large change in the front elevation (second link). Changes made post the second link version are:
- Extending the stone left of the garage to about 3ft
- Replacing the screened-in back porch with an open porch
- Extending the now open back porch past the in-law suite
This should be the last major alteration and we are now full on in details mode looking at siding options, exterior and interior colors, faucets, etc...

Stay tuned for more on our latest project... Have fun clicking on the links (open in a browser, no special software needed).

A Touch of Dutch